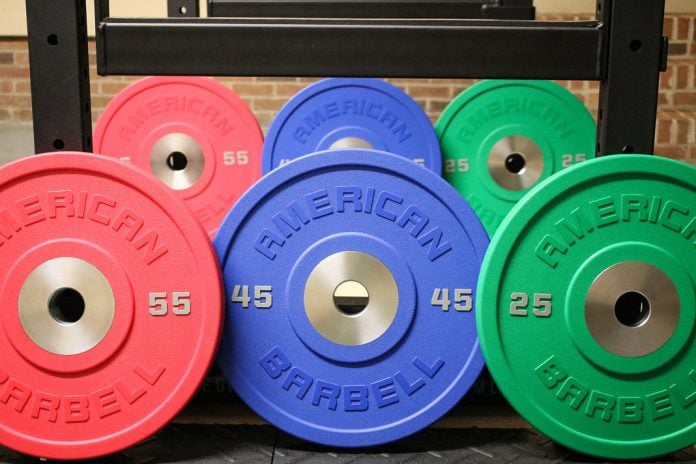 (Deep movie trailer guy voice) “In a world where rubber dominates the bumper plate arena, a West Coast company revolutionizes the game with a different type of product…”

“…and leaves you feeling as if you're king of the world…”

Ahhhh… I see what you did there.

Their unique characteristics and physical attributes make for a different type of lifting experience.

They are some of, if not the most durable plates available, they look incredible, and they perform at a very high level.

In this review, I'll go into detail as to why urethane, and specifically the American Barbell urethane plates, belong in the discussion as top dog.

When it comes to bumper plates, rubber is far and away the most common material. It's relatively inexpensive, it's easy to work with, and it's pretty durable. 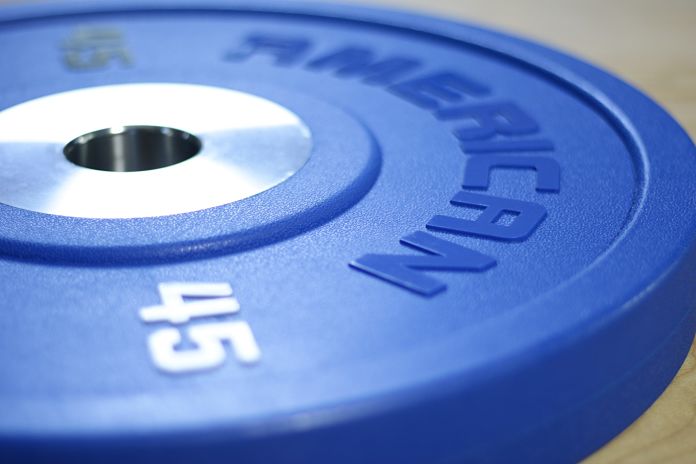 On the other hand, you've got Urethane, which offers two primary benefits over traditional rubber:

The downside to urethane is that it's more costly, but as you'll read below, that may be a worthy trade-off depending on your needs.

The American barbell urethane plates are my personal favorite bumper plates that I've ever used. 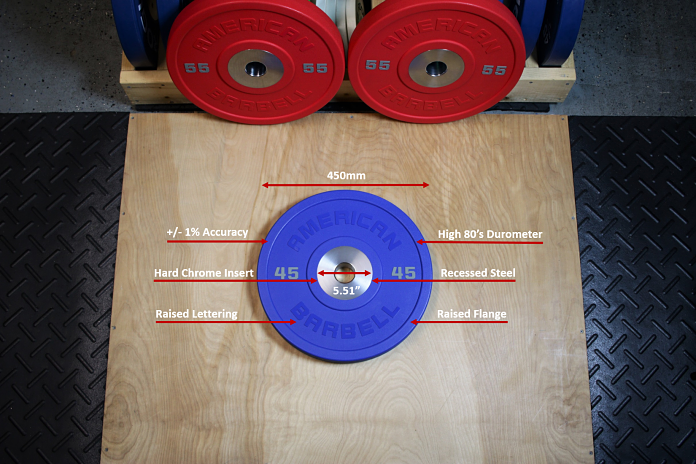 The specs on the plates are what you would expect with a premium offering. They're made with quality materials and they're built with IWF standards in mind. 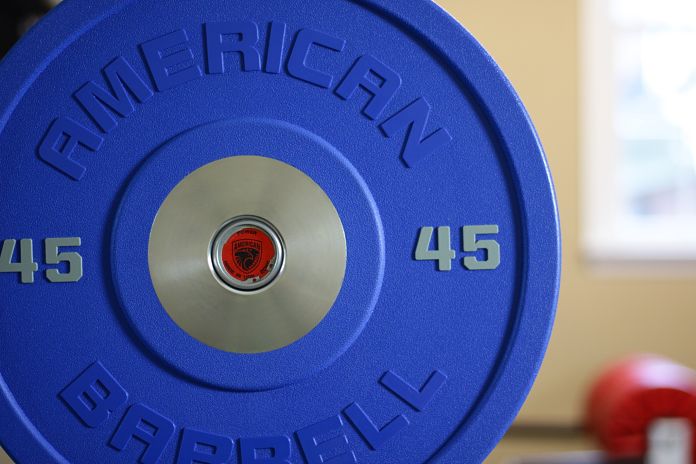 The plates are built to be consistent with IWF standards, although the plates themselves are not IWF certified. As of the time of this review, no other urethane plate on the market is IWF certified.

The inside of the plate is a solid cast iron core with a 140mm hard chrome center insert. This insert is constructed with one piece, which keeps the hub tight and secure to the rest of the plate. Unlike a rubber competition plate that has anywhere from 4-6 locking bolts, this plate requires less maintenance/tightening. It also makes for a nice, clean look.

In the past, American Barbell used a different hub style. As you'll notice in the picture below, the Rogue Fitness model uses that same (old) style. Intek Strength does as well. Today, American Barbell uses the updated hub style (left picture) that is one smooth piece with a perfectly beveled edge. The other manufacturers continue to use the old design with the exception of Hammer Strength. 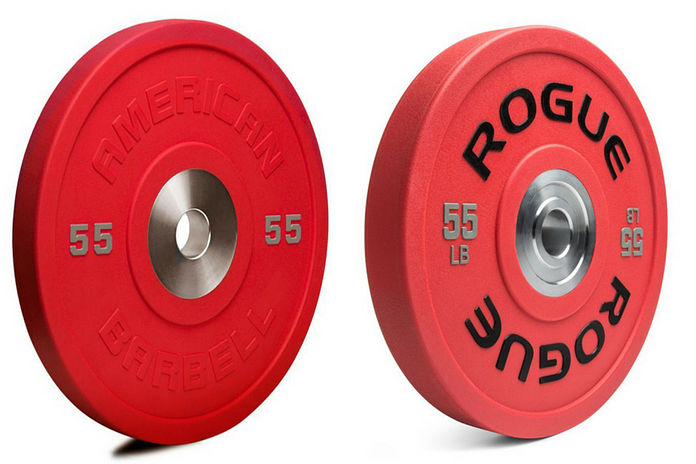 Lastly, two raised flanges surround the center hub and border the outer edge. These flanges protect against metal-on-metal contact for added protection and they allow for easier gripping of the plate.

I've received some questions on whether or not these American Barbell urethane plates are as accurate as a competition style bumper plate. Although American Barbell doesn't explicitly claim a tolerance threshold, you'll be happy to know that the plates are extremely accurate. 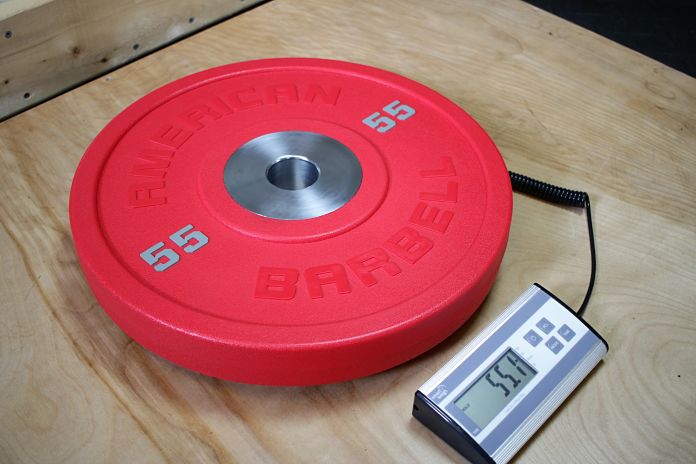 After weighing them on a calibrated scale, the results were as follows:

My plates are all well within +/- 1% of the claimed weight, which is very tight. In fact, they all meet IWF requirements. 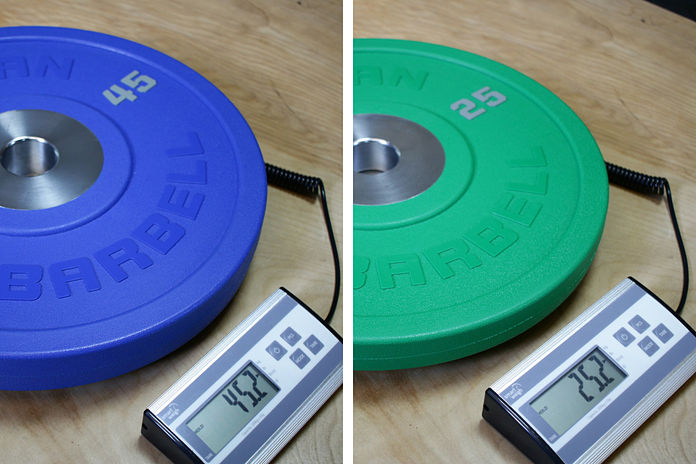 When it comes to choosing plates, especially bumper plates, thickness is a really important consideration. If you're lifting more than 405 lbs, you really need a thinner profile plate. Hi-Temps, for example, are simply too thick to add enough weight. Not only that, but they also disperse the weight differently. 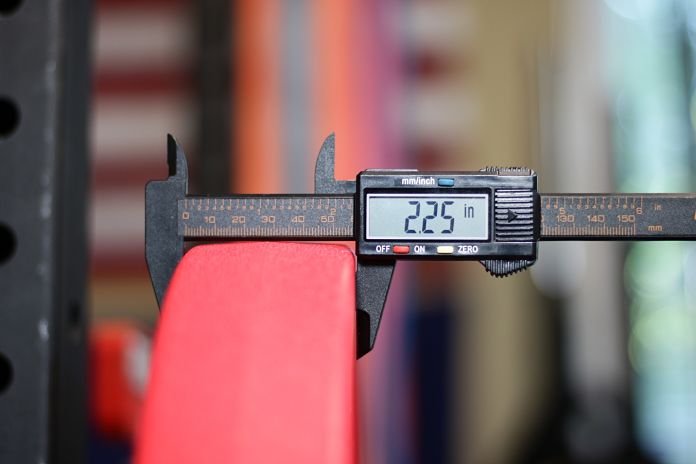 Some of this will depend on the type of bar you're using, the amount of weight you're lifting, etc… but thinner plates are undoubtedly the better option.

With regards to the American Barbell urethane plates, the thickness is great. Depending on the weight of the plate, the urethane plates are actually thinner than competition rubber bumpers. This is true on 45 lb and 55 lb plates, while the 25 lb and 35 lb plates are slightly thicker. 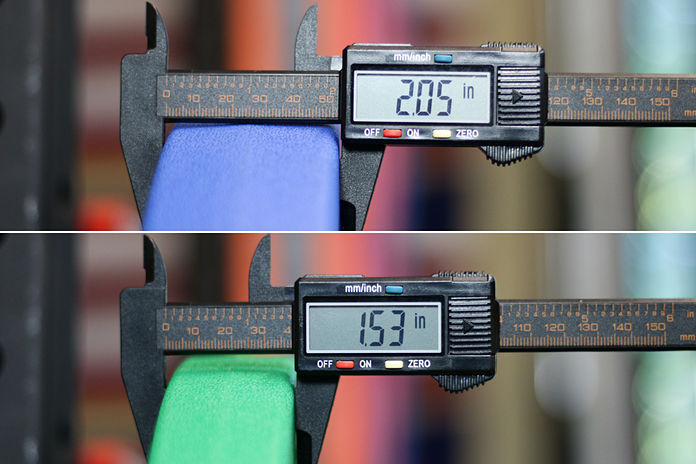 In the chart below, you'll see a comparison to the different styles and brands of bumper plates. The numbers referenced below are directly from the manufacturer, but they may or may not be entirely accurate. For example, the Rogue competition bumper plate states a thickness of 2.15″ on the 45 lb plate, however, my set is actually 2.23.” Minor differences aside, this will give you a good idea of what to expect when looking at the plate profile.

After measuring my American Barbell set, my findings were as follows:

Unless you like chasing barbells around the gym, protecting your face from bouncing bars, or having to constantly reset positioning, low bounce plates are ideal.

In the equipment space, this bounce is measured by the shore durometer rating, which is a rating from 0-100. It actually measures hardness. The higher the rating, the harder the material, the lower the bounce. Hi-temps, which are extremely bouncy, sit around a 75, while competition rubber plates are in the low-to-mid 90's. The American Barbell urethane plates come in at the upper 80's, which is good for a very low bounce. I've actually seen very little difference in the bounce of these plates and the higher durometer-rated Rogue competition bumpers (94). 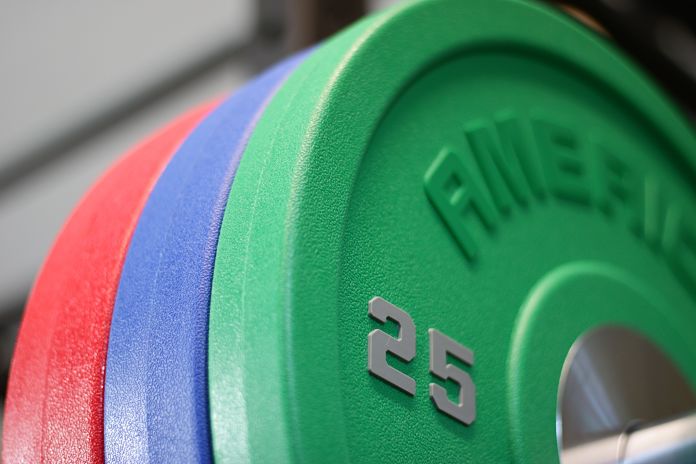 As mentioned earlier, urethane is superior to rubber when it comes to durability. These American Barbell plates are built to last for a very, very long time.

Traditionally, companies will drop test their bumpers at least 5,000 times, but not many drop them much more above that. Eleiko, for instance, drop tests their world-renowned competition discs 5,000 times. Rep Fitness has actually drop tested their competition plates over 30,000 times. Still, nobody tests drops like American Barbell. 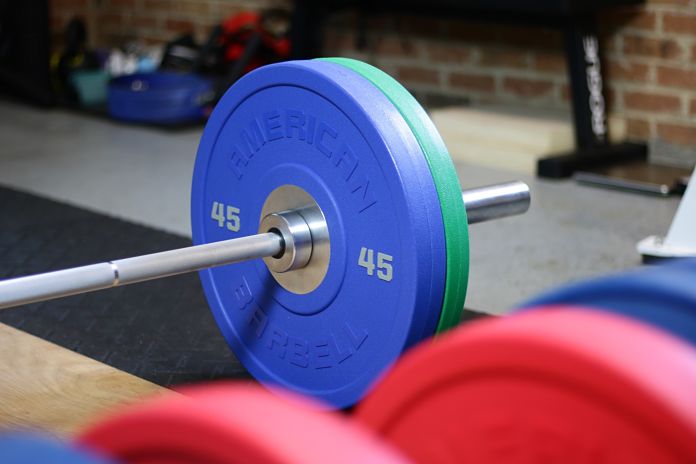 After drop testing well over 50,000 times from 8.5 feet, there were no issues of any material concern with the AB plates – only cleaning was required.

Now, if you're in a garage gym training alone or with a few buddies, this probably isn't that big of a deal. It will take a while to even hit the minimum drops that some companies test. If, however, you're in a facility, this could have a big impact. When American Barbell polled several of their facility clients, they learned that they were hitting between 3,000-5,000 drops per month! Even at the low end of that range, they're breaking through the minimum drop test before 2 months' time. 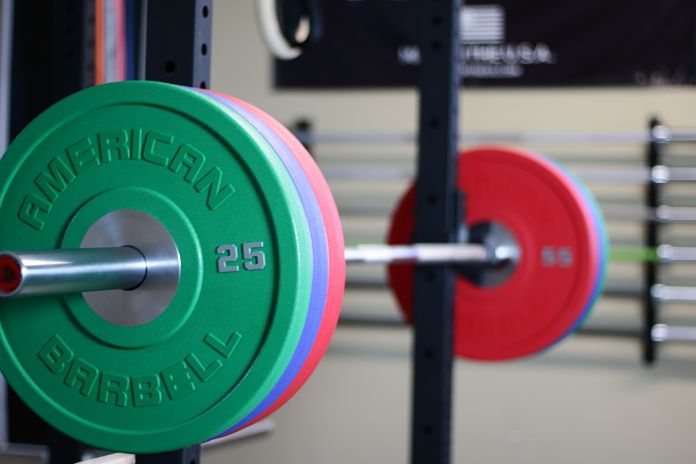 To be clear, I'm not suggesting that Eleiko competition discs are going to start breaking down after 2 months (or 5,000 drops), because they're not. They're highly reputable and they're a great product. What I am suggesting though, is that the American Barbell plates are going to have a longer life, and possibly a much longer life. They've tested their bumpers with exponentially more time under stress, which gives me a great deal of confidence that they'll stand the test of time.

Oh my God, Becky, look at those plates!

That was basically my reaction upon opening these beauties. Unless you prefer the more traditional colors of rubber plates, you'll be hard-pressed to find a better looking set of bumpers.

The colors on the American Barbell urethane plates are stunningly vibrant. I for one really appreciate the fact the colors are different than the norm. The ability to dye urethane is a distinct advantage in the aesthetics department compared to rubber, and AB knocked it out of the park. 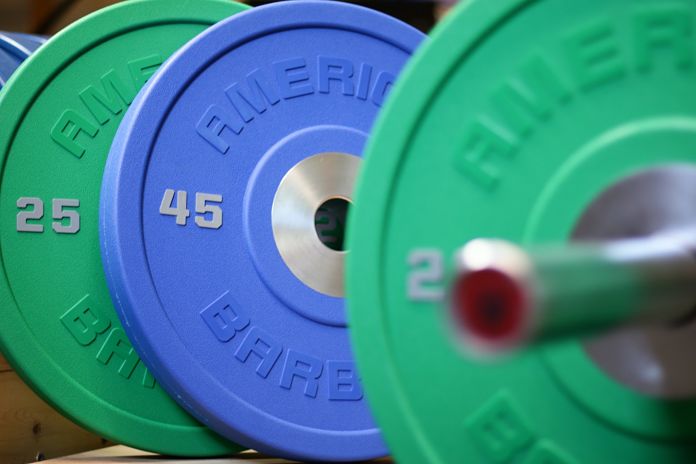 I'm a big fan of how they chose to do the lettering. Normally I prefer the stark contrast between white lettering and a plate color, but American Barbell's subtlety is a really nice touch. The words “American Barbell” are actually the same color as the plate, but because the lettering is raised, it gives a cool 3D look. Conversely, the numbers are painted in gray, which is also unique and cool looking.

I really love the smooth chrome center hub. I think it looks much better than the old design. It gives the plates a more high-end look and feel, in my opinion. The slightly raised pebble pattern on the urethane itself also provides a similar effect. It reminds me of the pebble-grained shoes that scream luxury. 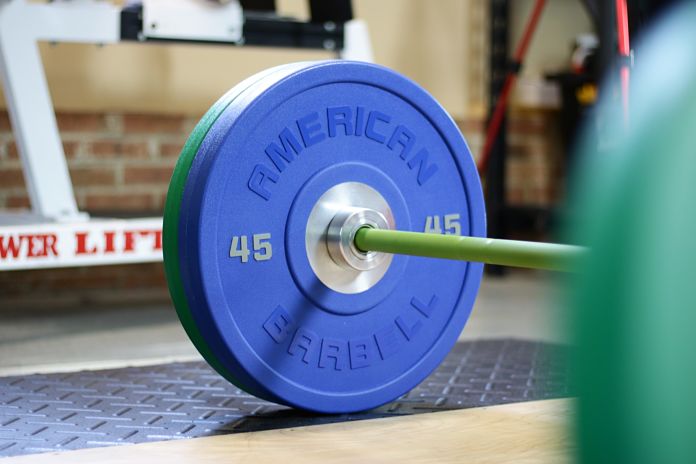 The one thing I wish American Barbell did on the pound plates was to add “LB” in the same manner they did “KG” on the kilo plates. I understand the reasoning why they did this, but I love the way the KG plates look, and I think the LB would be a welcomed change.

Overall, the uniqueness of these plates just draws you in. I find myself wanting to lift with these just because they look so badass. 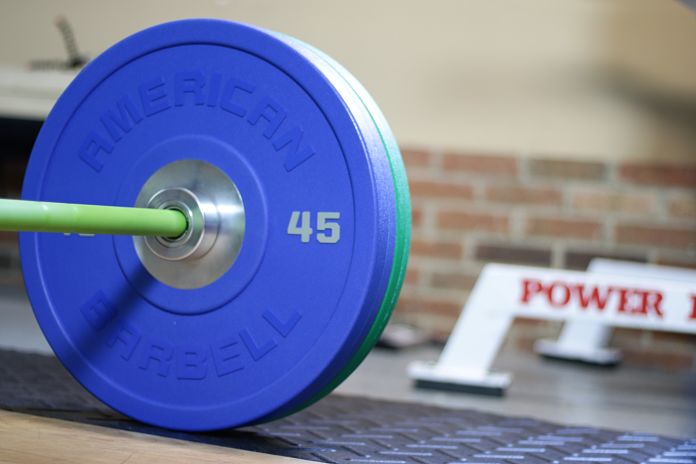 To put it simply, these plates are awesome. Having used them now extensively, I am very pleased with how they perform. The fact they are the best looking plates I've ever seen is just icing on the cake.

If you're in the market for a high-end bumper plate with superior durability, performance, and looks, the American Barbell urethane plates are going to be hard to beat.

American Barbell Urethane Bumper Plates
Final Verdict
If you're in the market for a high quality bumper, these American Barbell urethane plates are an excellent choice. They look amazing, they perform masterfully, and they're as durable as the come.
Construction Quality
9.8
Weight Tolerance
9.7
Plate Width
9.4
Bounce
9.3
Aesthetics
10
Value
9
9.6
Best in Class
Where to Buy
American Barbell - $200+ 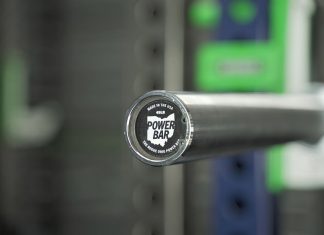 The Ultimate Guide to Building a Budget Home Gym (2020 Update) 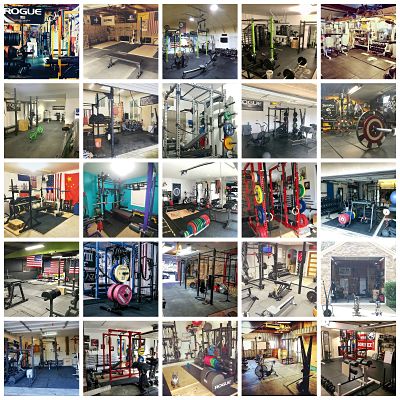 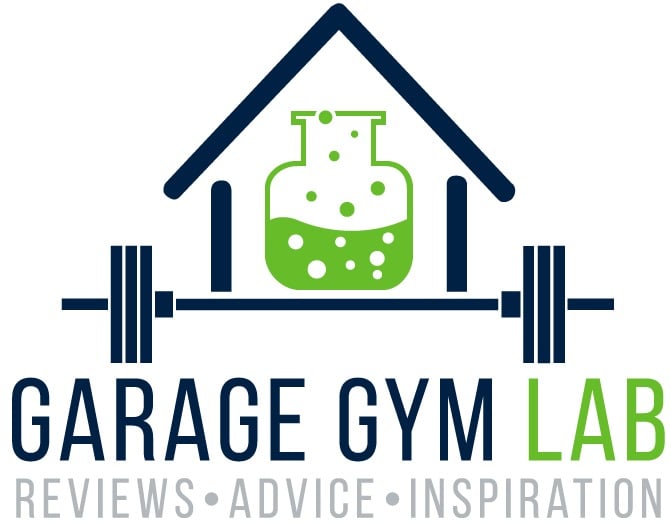 Disclaimer
Garage Gym Lab is a site dedicated to providing honest reviews and practical advice. Some posts may contain affiliate links, which will earn me a small commission if you purchase through them. I use these commissions to maintain the site and purchase new equipment in order to provide more content. If you found the information truly helpful, I would greatly appreciate if you purchase through these links. It comes at no additional cost to you.
Contact Me: Adam@garagegymlab.com
Follow Garage Gym Lab
© Copyright 2018, Garage Gym Lab All Rights Reserved