Read below to get a detailed look at the Eleiko Olympic Weightlifting Training Plates (LB) including product details, features, real user feedback, and more.

Eleiko LB Olympic Weightlifting Training Plates are very high-quality, durable, and beautiful plates. They’re different from the KG competition plates only in that these are in pounds, they don’t have as tight of a weight tolerance, and they’re not IWF-approved.

These plates are ideal for any lifting style, but they excel in Olympic weightlifting and even powerlifting given their low bounce and narrow width.

This is the LB variant – Eleiko also sells KG weightlifting Training Plates that are approved by the IWF.

What They’re Saying at eleiko.com

The below plates were picked as alternatives to the Eleiko LB Olympic Weightlifting Training Plates. 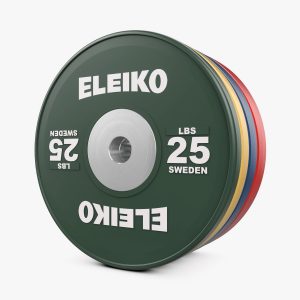