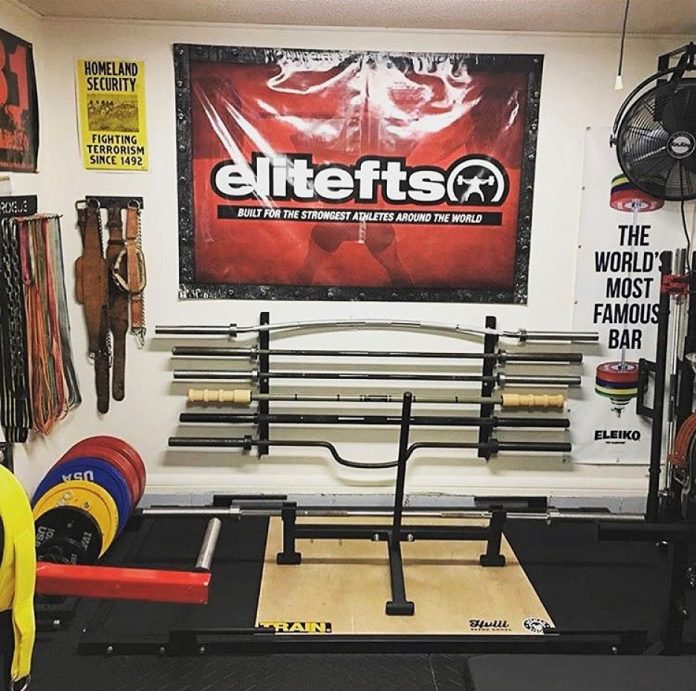 When I first saw Rob's gym I was blown away by how much awesome gear he had. Like many of us, Rob started his gym with a few bare essentials. Through a series of trades, he began accumulating better equipment… and a lot more of it. Today he has one of the most impressive garage gyms you'll find.

Join me as we step into ‘Rob's Barbell'.

While Rob grew his gym in a way many of us can relate to, his journey isn't exactly normal. As a 13-year Coast Guardsman, Rob was required to move around the country quite a bit. In that time, he sought out over 50 like-minded training partners. I'm sure you can imagine how difficult it was to find a quality gym that could support a group of guys occupying squat racks and benches for 2+ hours.

So, he started a garage gym… what he describes as “the perfect place for a bunch of us to train, get loud, and act rowdy.” When he first started out in 2013, he had a basic Rogue squat stand, a Texas Power Bar, and a lot of mismatched steel plates that he picked up for $0.30/lb. He was actually stationed in the Bay area at the time, forcing him to store his equipment in a storage unit since he didn't have an actual garage. 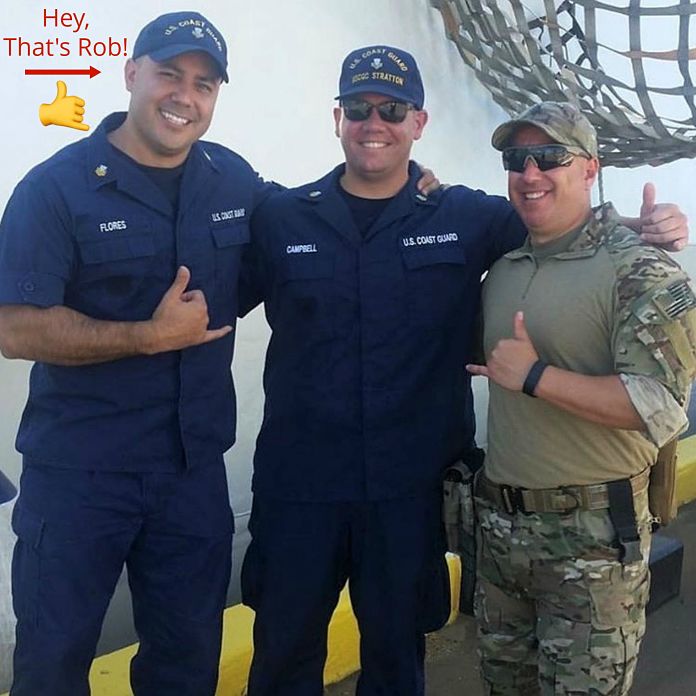 When he was moved by the Coast Guard to Hawaii in 2014, he finally had access to a small 2-car garage. This was the official start of ‘Rob's Barbell'. Most of the equipment was acquired online through the used marketplace (Craigslist) because shipping to Hawaii is very expensive. In fact, most companies don't include Hawaii in their sales (Matte Black Friday, etc…).

In 2016, Rob moved to Michigan, where he was able to buy more stuff online, used and new. Today he buys about 50% new and 50% used, but when buying used equipment, he always trades up. As an example, after picking up some adjustable dumbbells, he then traded them for rubber hex dumbbells, which he then traded for pro-style dumbbells.

Here's a funny/cool story – Rob once went to an estate sale at a house owned by Shaquille O'Neal. At the time, Shaq was liquidating everything because he was going through a divorce. The entire house was covered in Superman logos. Everything from the toilet seat, to the rug, to the headboard. While he was there, he came across some adjustable 100-lb pro-style dumbbells in the garage. He picked them up for dirt cheap and he's still lifting with them today. 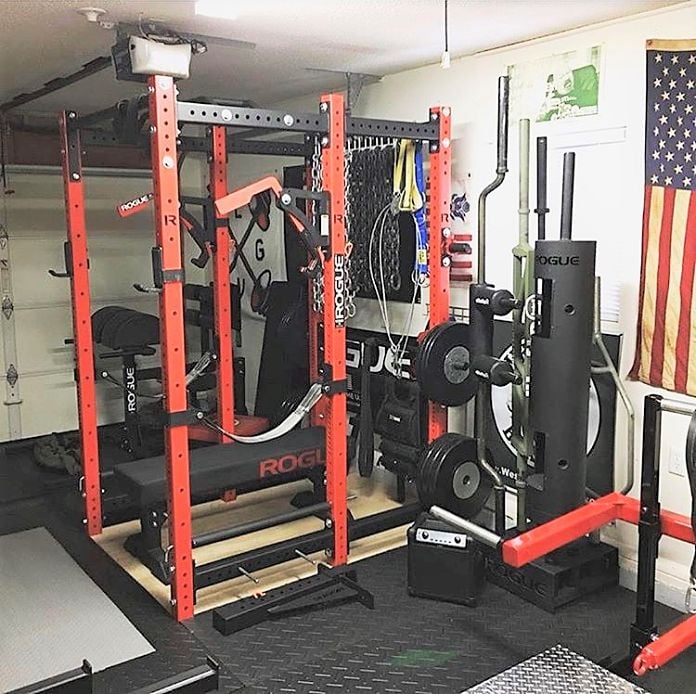 The most commonly asked question to Rob is “how do you move all this stuff?” The answer is that he has a very understanding wife (haha). She enjoys the convenience of having a gym a few feet away so much that she would sell other things like dining room sets, living room sets, etc… so that they could keep their gym equipment.

Rob, my friend, you found a good one!

Fast forward to 2018 and Rob has an incredible garage gym where he, his wife, and his buddies train.

Rob has no shortage of awesome equipment. From specialty bars to belt squat machines, and everything in between. 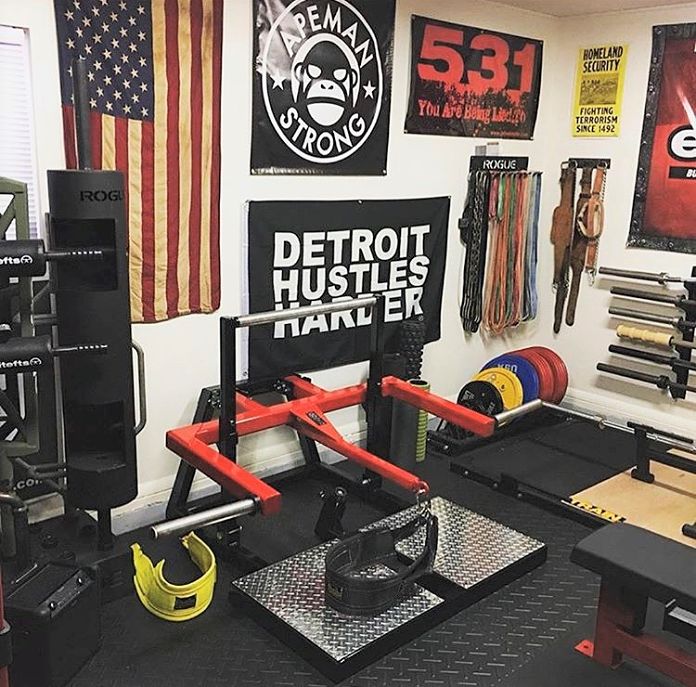 What are his favorite pieces? It's a toss-up between two:

The first is the Matt Wenning Belt Squat (unreal pickup). It's a very versatile machine that destroys your legs without loading the spine. It's great if you have low back problems. You can use the machine for squats, good mornings, straight leg deadlifts, and even rows. It's an expensive piece, but so far Rob has no regrets.

The second piece is the Edge Fitness competition bench. Rob acquired this bench through a swap. He actually called Rick from Edge Fitness and explained that he was disappointed in a competitor's product. Without going into detail, Rick offered to trade him. He even painted the bench a custom shade of red specifically for Rob. I've bought stuff from Edge and I've talked with Rick myself multiple times. Like Rob, I highly recommend them.

Let's break down the rest of his impressive gym piece by piece:

Rob has an impressive collection of bars, including numerous specialty bars from the likes of EliteFTS, Rogue, and NY Barbell. You're bound to find something in this list that will suit your training style. I particularly love the EliteFTS Safety Squat Bar (review here) – I use it regularly in my own training. 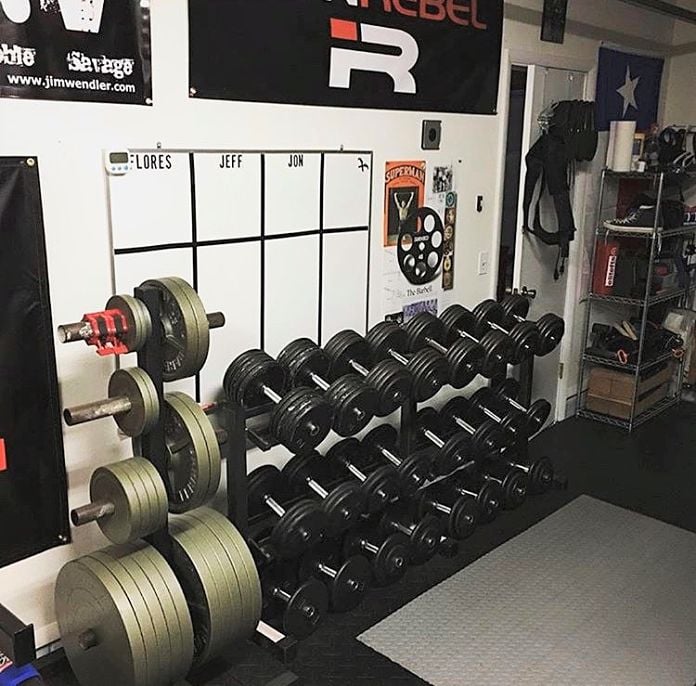 As mentioned above, Rob owns the awesome Edge Fitness competition bench that he uses as a stand-alone bench setup. In addition, he owns a “bastardized” Rogue RML-690C Power Rack. 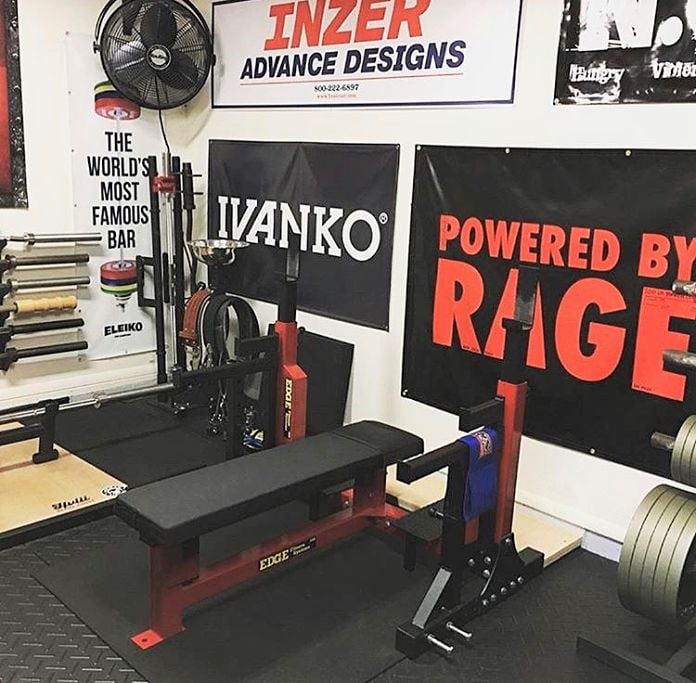 Rob has one of the best collection of plates that you'll find, including Ivanko and Rogue. I could stare at them all day. 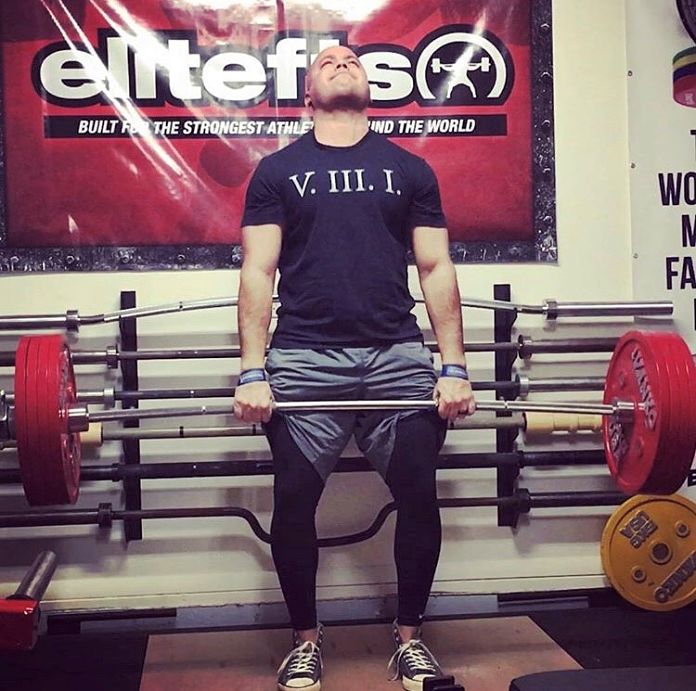 What gym is complete without some awesome accessories? Rob certainly has them. If you haven't been body tempered, you're missing out. I own the tapered Step Child, which is a 76-lb tool, and it's incredibly effective. 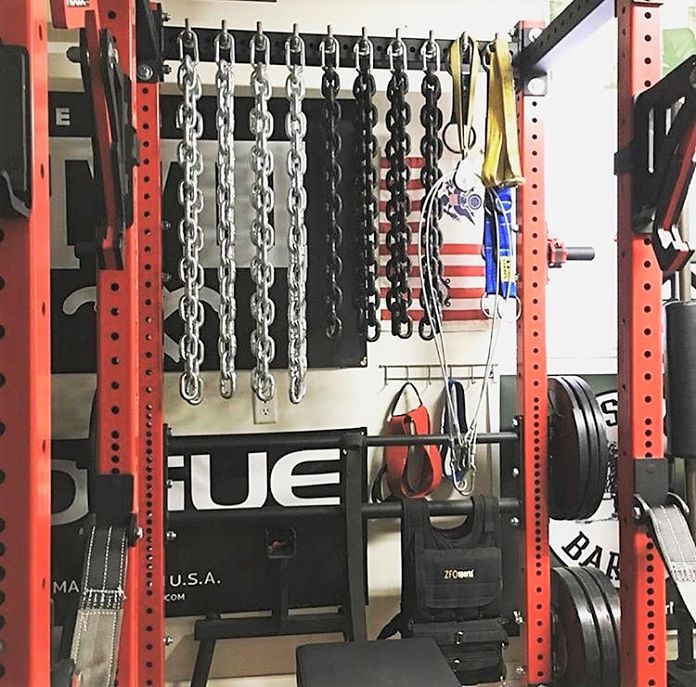 Rob's Barbell is one of my favorite garage gyms. It's clean, well organized, and it has amazing equipment. That Wenning Belt Squat is something of the Gods.

You can tell Rob loves training and his garage gym. The fact he shares his space with friends is something I love to see, and it's a real testament to his passion.

I want to thank Rob for sharing his journey, his garage gym, and a list of his equipment with the community!