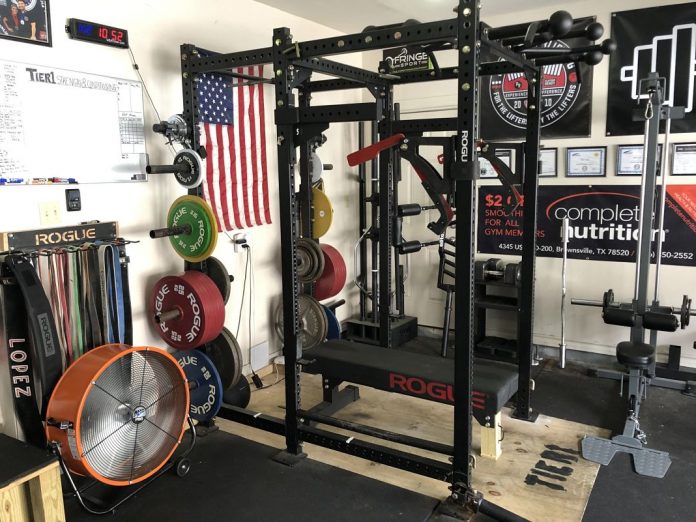 Robbey is a performance coach with an awesome garage gym. His space is equipped with quality gear from some of the biggest names in the industry and, believe it or not, he can still park a car!

His journey started five years ago – since then, he's been adding piece-by-piece to create the garage gym of his dreams.

Join me as we step into Robbey's awesome garage gym.

Robbey's garage gym journey started back in 2015 when he was working long hours at his school as a performance coach. From morning workouts before school, normal classes during the day, and after-school workouts/practices, he didn't have much time to dedicate to his own training. He would use the school's weight room, but after being there all day long, he grew tired of the same scene.

Like many of us, Robbey stumbled upon Pando (@pandobearninja) on YouTube. If you aren't familiar with him, he's one of the garage gym OG's. I remember doing the exact same thing as Robbey – finding Pando and becoming addicted to the idea of having a garage gym for myself.

The problem for me, and Robbey, is that we didn't have garages/homes at the time. Luckily for Robbey, his good friend offered up his garage for a group of their buddies to train in. Initially, the plan was for everyone to buy some equipment for everyone to use and grow it from there. That didn't really happen though, so Robbey took it upon himself to start buying a lot of the pieces. He gratefully trained in his friend's garage for two years before finally getting his own garage and, as he puts it, going “overboard buying things to outfit it.”

Like a lot of us, Robbey found the whole equipment space to be very overwhelming at first. I mean, how many barbells can there be, right?

The answer is a lot 😉 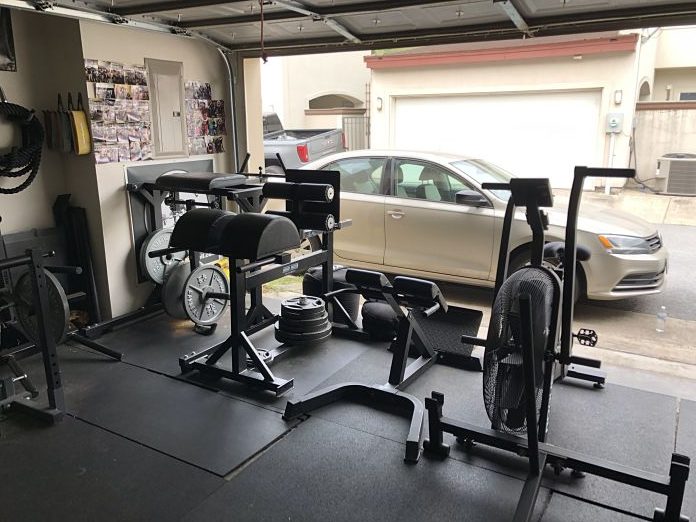 Robbey trains primarily as a powerlifter, but he didn't realize there were different barbells for different types of training. After going to Rogue's website for the first time, he immediately became overwhelmed before just buying an Ohio Bar… it wasn't until a couple of months later he learned Rogue also sold the Ohio POWER Bar. His first rack was a Dick's Sporting Goods Fitness Gear Pro Half Rack. As he puts it “it did the job extremely well for 2 years. Not the best, but by no means the worst.” He purchased some Cap steel plates from Academy Sports and some bumper plates during a sale at Again Faster.

This was only the start of his garage gym. As you'll see below, it's grown substantially.

Now on year five of his garage gym, everything has its place. His gear has been carefully curated to meet his needs and provide a lot of variety… all while giving him enough space to park a car. Most of his equipment was purchased new since the used marketplace in South Texas isn't very active. Expensive? Yes, but it's a passion that “I don't regret at all.” Robbey's quick to point out the support of his wife as well, which has made a world of a difference. 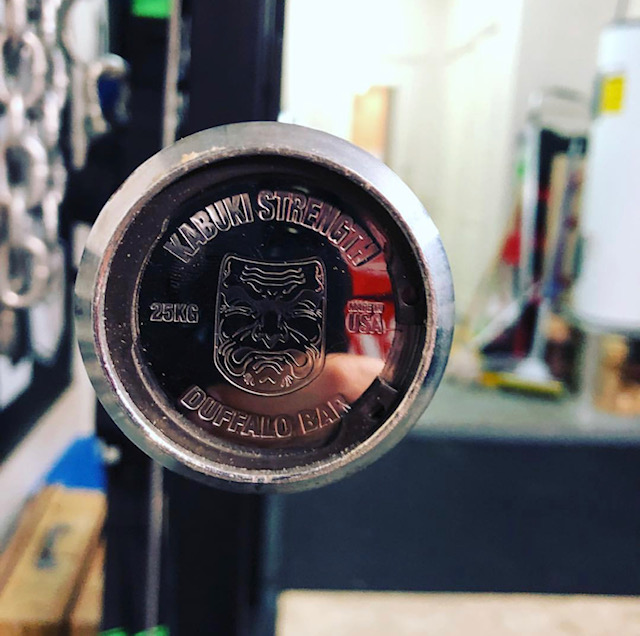 When I asked Robbey what his favorite piece of equipment was, he admitted how tough the question was, but ultimately landed on the Duffalo Bar from Kabuki Strength. “Ever since I received it as a birthday present from my wife, it's been one of my go-to bars during my training.” The Elitefts Spider Bar was a close second.

With that, let's have a look at Robbey's equipment lineup, piece by piece. 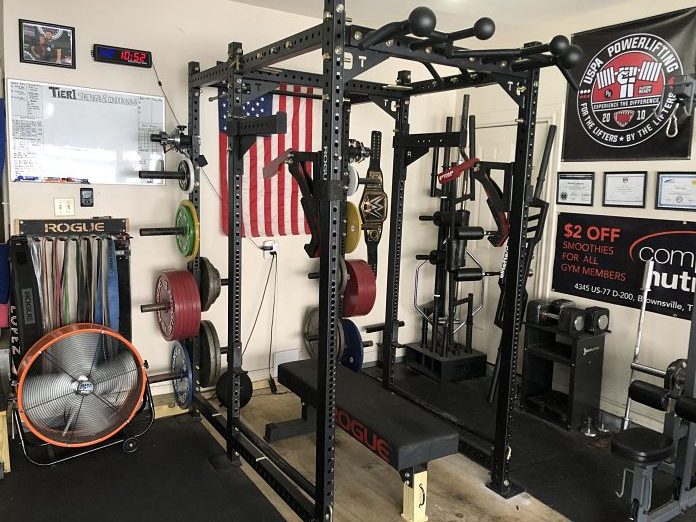 Robbey has a very cool rack and bench setup, headlined by a Titan rack with multiple attachments, a wall-mounted rack, a modified flat bench, and an adjustable bench. 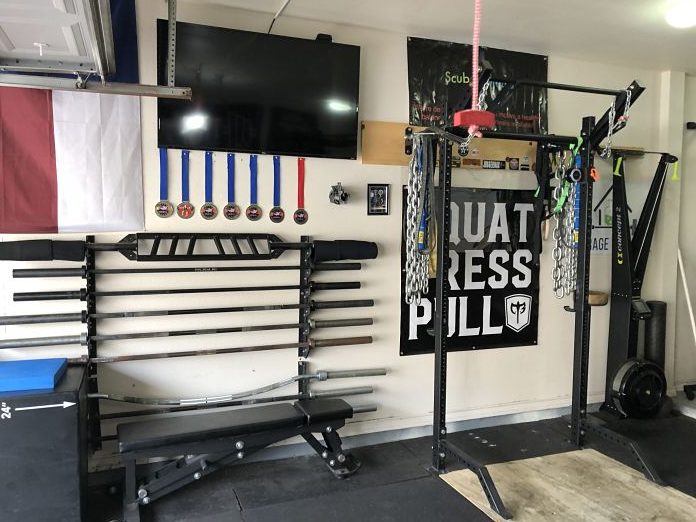 There is no shortage of bars in Robbey's gym. From traditional bars to specialty bars, he has basically every base covered. 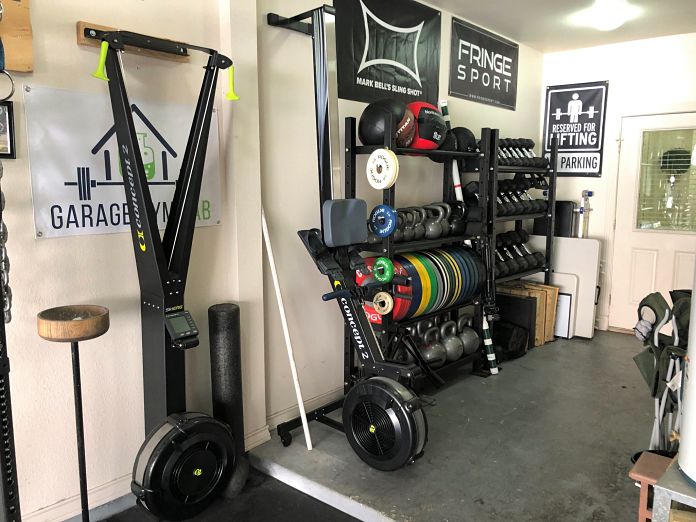 Robbey's plate collection is impressive, headlined by a full set of Rogue Calibrated Powerlifting discs. He also has a nice mix of DBs and a few KBs for variety. 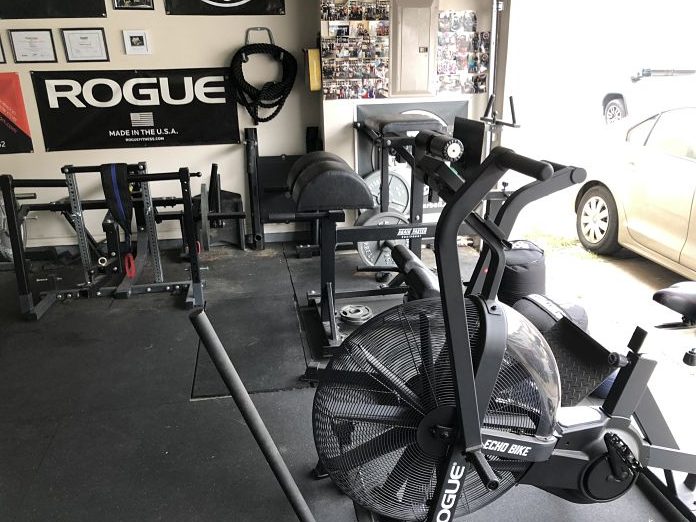 Robbey has a very well-rounded conditioning lineup, which includes a rower, a skierg, an Echo bike, slam balls, sleds, ply boxes, and more. 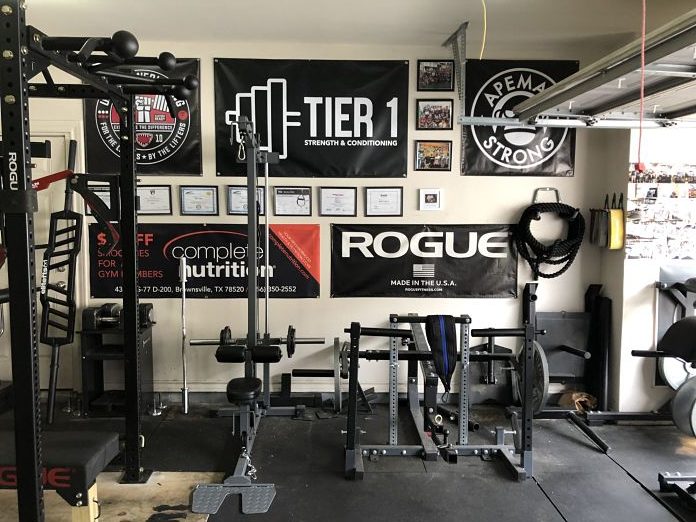 In addition to all the free weight pieces in Robbey's gym, he also has several machines. 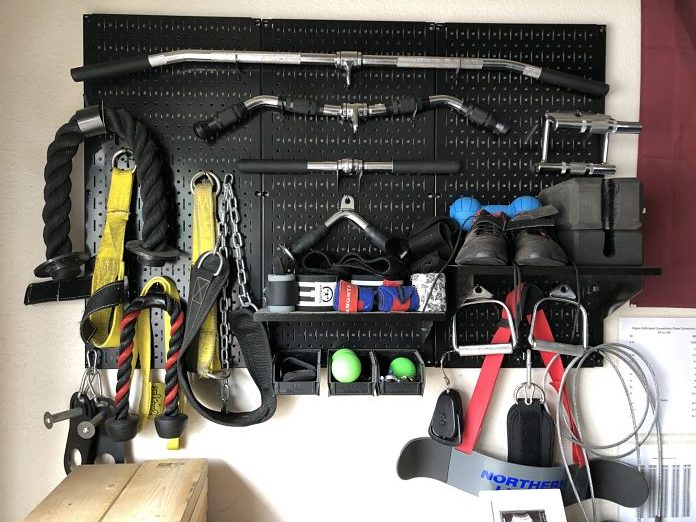 Organization, in my opinion, is a worthwhile investment for any gym. It's much easier to find things, it creates a cleaner and more efficient space, and it just looks good. Robbey has done a great job making his space very organized with the use of a few items. 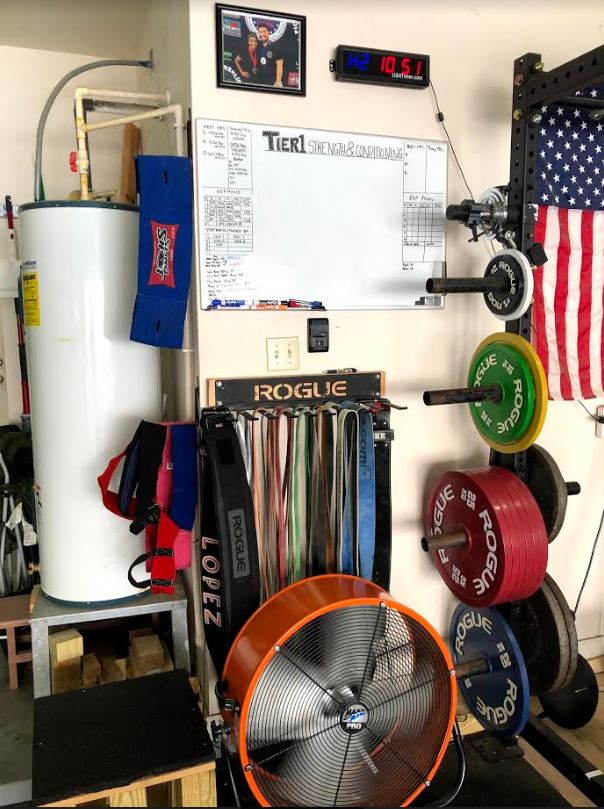 Last but not least, Robbey has an assortment of miscellaneous items to round out his training and provide specificity.

Overall, Robbey has done a tremendous job with this garage gym. It's well-equipped, well-laid out, and well-organized. It's a great example of ‘enjoying the process.' This gym is five years in the making, and it's still growing.

I'd like to thank Robbey for taking the time to share his journey and space with the readers of Garage Gym Lab. You can follow and stay in touch with Robbey here.