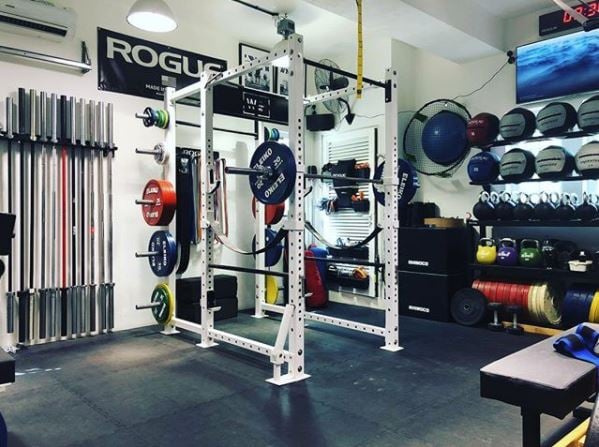 Aaron has undoubtedly one of my favorite garage gyms… in the world. You see, Aaron lives in Dubai (more on that later) where he, his wife, and his buddies lift heavy ass weights with some of the best energy you’ll find. In fact, Aaron has one of the most awesomely intense styles I’ve ever seen. It’s only fitting to start this off with one of my favorite clips of him.

This gym is full of amazing gear, including several completely custom pieces.

Join me as we step into “The Whitebox.”

Aaron’s powerlifting garage gym started 4 years ago from humble beginnings. After moving into a villa with an enclosed garage and ample street parking, he began thinking of the possibilities after seeing the “street parking” commercial from Rogue Fitness.

What he didn’t probably realize at the time was how this was going to set him down an amazing path of accumulating some of the best equipment for the next several years… a run-away train he calls it. 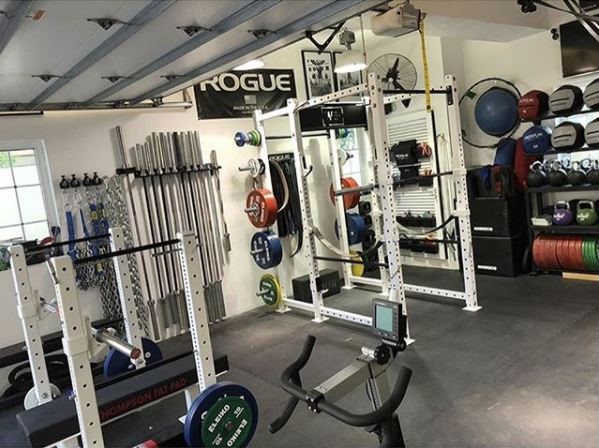 Originally Aaron was interested in Crossfit. His first purchase? Cheap floor mats, a kettlebell, and a wall ball. Talk about starting small. Shortly afterwards, he had the floor in the garage redone. He removed a back step to level the entire floor, removed all the bricks, and poured a new reinforced concrete floor that he then covered in 14mm square solid rubber interlocking tiles.

From there, he invested in a rack, a barbell, and a 160kg bumper plate set. He was also able to score a used Life Fitness treadmill, Life Fitness crosstrainer, and a Concept 2 rower from a local gym that was closing down. 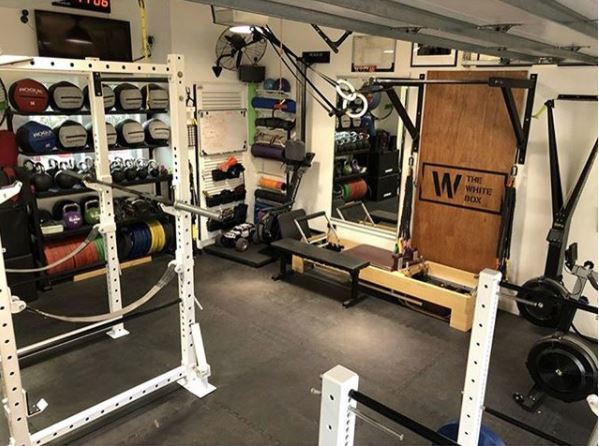 The used marketplace in Dubai isn’t the best unfortunately, but Aaron has still managed to grab some other nice used gear thanks largely to closing gyms.

A few of his quality scores include:

During Aaron’s journey, he fell in love with the sport of powerlifting. While he still has a lot of the equipment he used in Crossfit, his primary lifting goals are now centered around the Big 3: squat, bench, and deadlift. 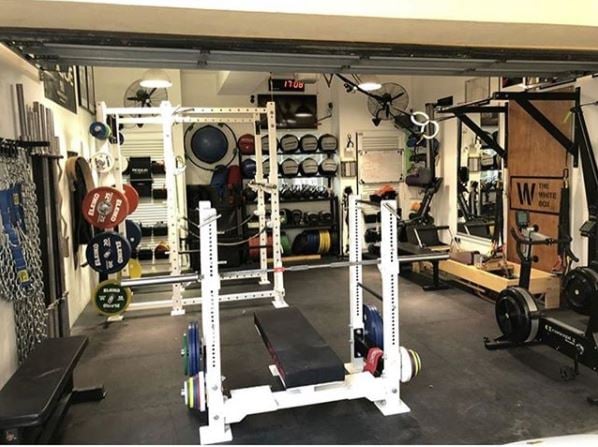 With that goal in mind, Aaron had to expand his equipment inventory. Knowing the used space wasn’t going to yield enough, he either purchased new gear or had the rest custom made. To give you all some perspective, shipping to Dubai is brutally expensive. A Rogue bar costs $250 for shipping alone! Direct import shipping from Sweden (Eleiko gear) is also very costly.

So to combat the extraordinary costs, Aaron hired Dimension Fitness to custom manufacture his power rack, competition bench, pull up rig, storage rack, and wall ball holders. And boy did they deliver.

Let’s have an in-depth look at all of Aaron’s amazing equipment.

When you see the Whitebox, you’ll notice that it not only looks polished and downright amazing, but also that it’s full of beautiful equipment.

When I asked Aaron what his favorite piece was, he answered the competition bench. The reason is that it’s completely spec’d to his design. It’s modeled after the Rogue Westside bench, but it has no front crossbar, which allows for better positioning. It also has integrated plate storage, Westside hole spacing, and of course a welded spotter deck.

Piece by piece, his incredible gym look like this:

Aaron’s collection of bars is just amazing. It’s a powerlifter’s dream, but with some flair for the Olympic lifters. It would be impossible for me to pick just one… the choices are too good! 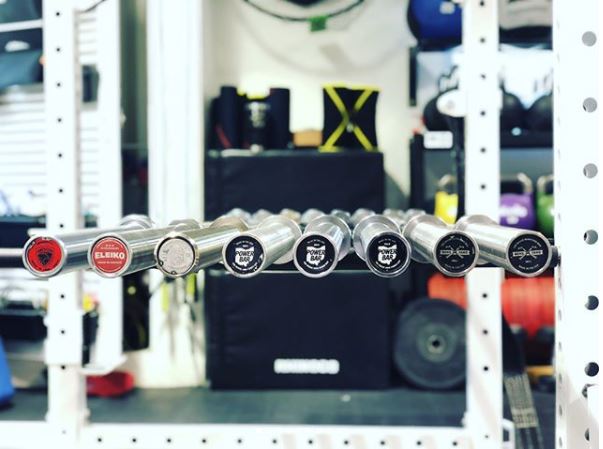 The Whitebox is home to a really nice collection of dumbbells and kettlebells, headlined by a full set of TKO dumbbells. 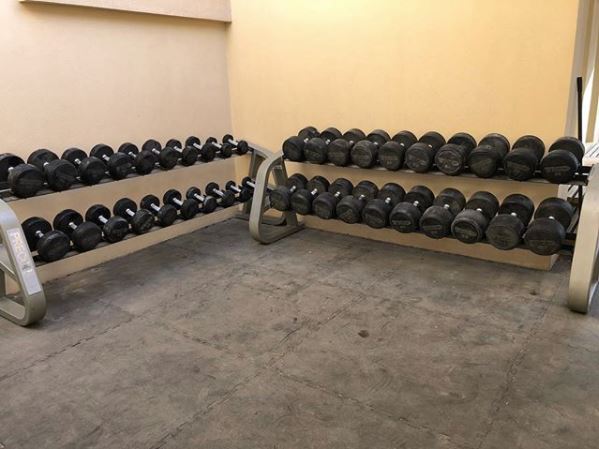 If you’re looking for plates, the Whitebox has you covered in a big way… I’m talking a 1,420kg kind of way… mind blown.

As mentioned previously, Aaron had his rack and bench custom made by Dimension Fitness. 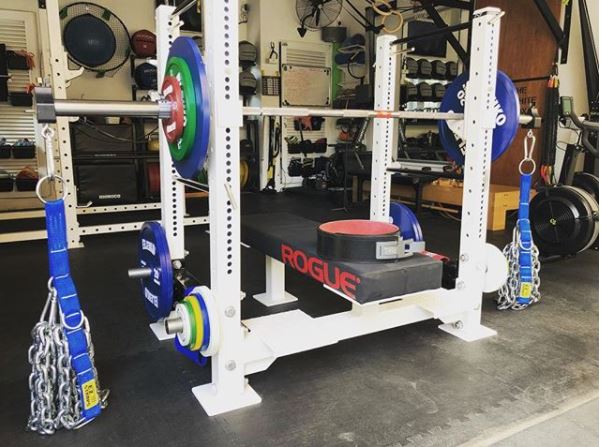 His rack was loosely based on the Rogue Fitness RM-6, and it even came with a laser-etched ‘Whitebox” logo. With its custom holes, he was able to fit the following attachments:

Aaron also has a Rogue SML-2 Squat Stand, which he uses in his awesome outdoor space.

In addition to the custom bench detailed above, he also has a bolt-together utility bench from Rogue. Both benches are equipped with a Thompson Fat Pad.

If you like Concept 2 equipment, you’ll love the Whitebox. 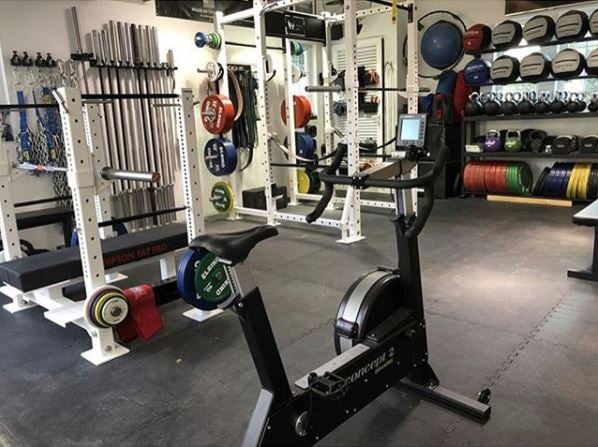 As if this gym wasn’t awesome enough already, Aaron has a slew of other nice gear ranging from prowlers all the way down to IPF collars. 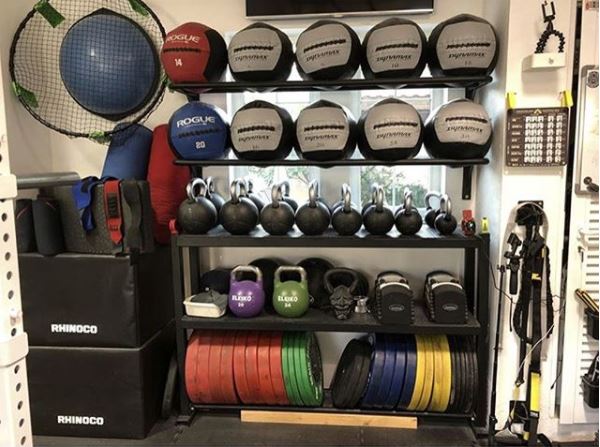 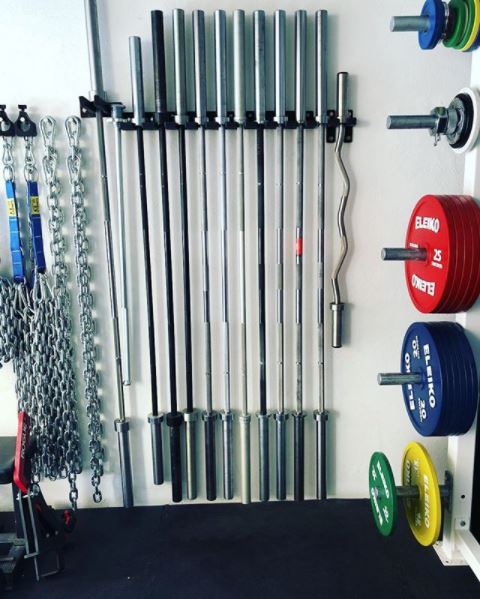 This gym is simply unbelievable. It’s so clean, it’s so well organized, and it has some of the best equipment out there. I am thoroughly impressed.

Not to mention Aaron is just an awesome guy. I’d like to thank him for sharing his journey, his garage gym, and a list of his equipment with the community! 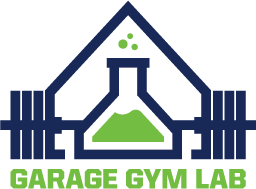